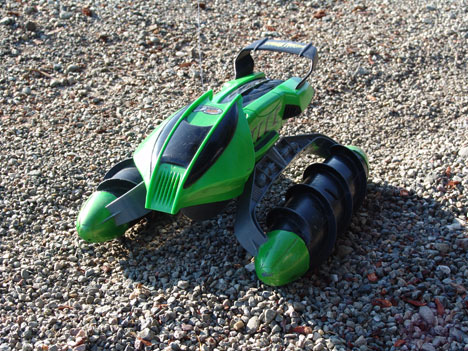 Well, look at this! Another total oddity from Tyco. At least unlike their Shell Shocker, the Terrain Twister could be a real vehicle that might actually exist in the future or on some other planet. It looks sharp, fast, and mean.

This vehicle uses the "TMH Flexpack" battery system that only Tyco makes, so you are forced to buy theirs for $30 with charger, on top of the $49.99 the vehicle costs. That's a little annoying, but at least the TMH Flexpack is being used by more and more of their RC toys, so if you buy another Tyco later down the line, or if you already have one, you'll be in luck. Also don't forget to have a 9V battery handy for the controller.

Controls for the Terrain Twister are very unique. Under your left thumb on the transmitter, there is an omni-directional joystick pad, and on the right are two connected buttons that control angle of the pontoons (the assemblies holding the screw-looking things on the side that propel the vehicle). There's a lot of stuff you can do with the left stick and it moves easily and doesn't need to be moved much, so it takes patience and some finesse to get it right. Forward and backwards are straightforward, so no problem there. Everything else takes getting used to. If you push left or right on the stick, the Terrain Twister does not turn in either direction, at least not on land! Instead, both screw drives rotate in the same direction, making the vehicle move sideways, without turning! If you push on the up button on the right side of the controller, the pontoons angle towards eachother in the front, and the body of the vehicle angles down towards the front a little. While holding that button, if you go left or right with the left joystick, now the vehicle will go in a wide circle, with the front always facing towards the center of the circle. Push on the down button on the right and go either direction with the left stick, and it will move in a large circle with the tail facing the center of the circle. Yes, it's complicated and like I said, it takes getting used to.

So, what if you just want to turn left or right while going forward or back? You have to move the left stick at a 45 degree angle in the direction you want to go. Think of the control being in the center of a big clock. To go forward, you push towards 12 o'clock. To go back, you move it towards 6 o'clock. To go forward and turn right, you will move it to right between 1 & 2 o'clock. To move backward and turn right, you move the stick to between 4 & 5 o'clock. My advice? Don't even use the buttons on the right until you've mastered the left stick. Oh, but when we get to the water, the controls will change a little. More on that in a minute.

Unfortunately, we were not able to really drive the Terrain Twister indoors. On a kitchen or hardwood floor, the screw drives don't get any grip at all, and the vehicle can only slide to the side, not go forward or backward at all. On carpet, it tries to move, but bogs down terribly as the vehicle tries to burrow its way through the carpet. Again, the only effective means of propulsion is sideways. That was annoying, so we headed out to a dirt & gravel field. There, we were able to get it to move the way it's supposed to. It's actually really slow , but once you start doing combinations with both controls, the way it moves is pretty interesting. The funny thing is, it still went the fastest going sideways. It was really cool, though, to see it twist & swirl its way through softer dirt and fine gravel, leaving a distinctive tread pattern behind it. The whole vehicle isn't very heavy, so it's even able to go over very loose dirt and dry sand.

One of the most interesting things about the Terrain Twister is that it's supposed to be amphibious -- able to travel on both land and water. So, we took it out to a boat launch, and you'll see in the video below where we nervously drove it out to the open water for the first time. It works! It floats nicely with the pontoons mostly submerged, and then you just use the left stick to control its motion. There's only one thing that changes in a major way. When you're in water, pushing the left stick either straight to the left or right actually makes the whole vehicle spin around in that direction, turning in place. It cannot move sideways in water. This was actually a lot more intuitive than the way it drove on land! Again it was slow, but cool nonetheless.

The Terrain Twister was fun to test, and being able to drive right into water and keep on going was a real treat. The video really says it all -- what you see is what you get. If you like how it looks there, you'll like owning one. The controls really are somewhat complicated, but learning them is like learning to ride a bike. Once you get over the initial learning hurdle, you'll be good to go forever.