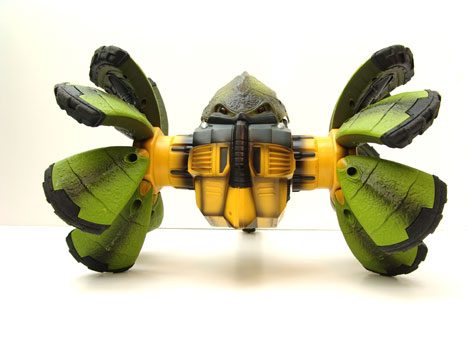 I've seen some strange-looking RCs before, designed to do various unique stunts or what not, but this, this is just something else entirely. Even the controller looks bizarre. How do you even classify the Shell Shocker? Is it a robot? An alien? A little of both? Whatever it is, it's very interesting, but we'll just have to see how it runs.

It's "bring your own batteries" with this beast, and Tyco forces you to use their exclusive Pro Flexpack battery/charger combo for the vehicle, so you can expect to "shell" out another $30 US on top of the price of the 'Shocker to get it running. At least the transmitter uses a regular 9V battery.

The first attempt at running the Shell Shocker was done indoors. That didn't work out too well. This beast is entirely too large and too powerful to use inside -- I'm certain it could damage almost anything it hit. (Hear that, parents? Don't buy a Shell Shocker for your kids to use in the house! You've been warned!) Next up came a wide open dirt & gravel field, where we were truly able to "release the beast." Controlling it takes some practice. Each of your thumbs goes on a control pad on the transmitter, controlling the wheel/leg/whatever you want to call it on that side of the vehicle. To go forward, you push forward on both pads. To go left, you push forward on the right pad. To spin in place, push one pad forward and the other one backwards. Transformation is controlled by paddles on the bottom side of the transmitter, which you push with either index or middle finger; one side transforms it into a ball and the other takes it back. You can stop at any point during the transformation, though, leaving it in any one of an infinite number of in-between modes.

The Shell Shocker has a tail, and as it turns out, this tail is very important for movement. When you go forward, the middle of the beast rotates around until the tail hits the ground, which stops it and forces the sides to now spin like wheels. If you try to go backwards, the tail coils up around the body and the body just spins, and you don't go anywhere. The tail is also useful for seeing what direction you're facing; from more than 15-20 feet away, it's almost impossible to tell front from back otherwise, and besides, the two may flip at any time.

We found the 50% in-between transformation ("Attack Mode," they call it), where the "wheels" are as tall as they can get, to be the most useful mode. It's the fastest mode and also seems to give the best grip on terrain. The least useful form was the fully rolled up mode (we just like to call it "ball mode"). As a ball, it just rolls. If you try to carefully control its direction, any bump in the road can throw it off (even on pavement) and send it into a spin. It can be useful for playing some form of wacky RC bowling, though!

The good thing about the whole transformation system is that you can do it at any time, whether you're moving or not, and that gives you the opportunity to do some interesting stunts, or to get out of some sticky situations. Our favorite surprise trick was rolling in ball mode until it came to a rest on its side, then transforming so that it stands up while lashing its tail around. Cyclone spins were also fun, if not a little scary.

Alright, let's see if we can sum this up. The Shell Shocker -- there's never been anything like it, so it definitely scores some kind of points for originality. It will definitely strike fear into some peoples' eyes with its wild, erratic movements. The problem is, its movements are wild and erratic because it's difficult to control. It's not even difficult in a way that's challenging and fun, it's just confusing and frustrating. Three people tested it, and none of us really liked it. I'm actually glad the Professor decided to boycott the test, as I'm sure he would have been just as frustrated with the Shell Shocker as we were.

Sorry Tyco, but you messed up with this one. It's no wonder that there are always plenty of used Shell Shockers for sale on eBay, including, at one point, ours.