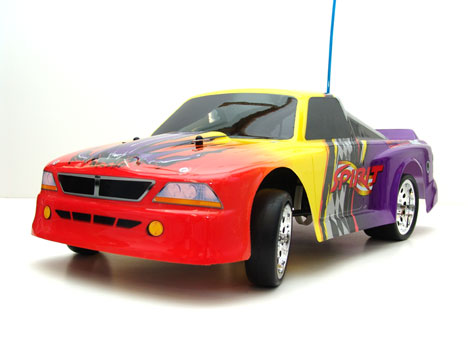 Before I begin with my thoughts on this truck, I've got to give some background info about it. This site is all about so-called "toy-class" RCs that you cay buy at Toys R Us, Wal Mart, Target, Radio Shack, etc. Strictly speaking, the Traxxas Spirit is not a toy-class RC. You can't even order it at toy or electronics stores -- it's only sold at hobby shops. Traxxas is, in fact, a company that only makes and sells hobby-level vehicles. Why are we talking about it here at RC Mania? It's cheap, cheaper than many of the fancier toy-level RCs, yet its performance is supposed to be just as good or better. So, before you say it's "not fair" to compare the hobby-level Spirit to a toy-class RC, be sure to look at the price tag and compare it to a top-of-the-line Nikko or Fast Lane!

With that out of the way, let's look at this truck. First off, I have to admit that I don't like the style of this truck's body. It looks cheap and fake. In fact, I don't think I've seen any supposedly inferior "toy-class" RC that doesn't look better than the Spirit. The body doesn't come attached to the chassis, and this is because you need to put your own stickers on. This is kind of good because I can pick & choose which ones I want to use or leave off. They even give you two completely different options for the grille and headlights, so that's cool. Attaching the body is just a matter of sliding it over four posts that stick through pre-drilled holes, and then putting on four little metal things called body clips. Simple enough.

The chassis is more interesting. There are actual oil-filled shocks at all four corners, compared to most vehicles that just have springs. This should definitely make the truck drive smoothly and not bounce around a lot when going over bumps. What I especially like is that the front suspension is truly independent, and at the rear, it's semi-independent because the whole rear section of the truck rotates around a ball joint, and it can either go up & down or twist. All of the springs seem a little too stiff, though.

The tires are real rubber slicks that should have really good traction, and while the fronts seem a little skinny, the rears are nice & wide! It reminds me of a dragster. There's one metal-encased assembly part on the side that says "Caution! Hot," so I'm assuming that heats up when you're driving. Fortunately it'll be completely under the body and out of the way, and the battery isn't close either, so I'm not worried about accidentally burning myself. Okay, enough looking & talking, time to do some driving.

As I mentioned above, the body needs to be attached to the chassis, and you probably want to put stickers on before that. You also need to install the antenna tube (which takes patience because the antenna wire comes all bunched up and you have to get it straight to fit it through the tube all the way). After that, charge up a 7.2V battery (not included) and slip it into the battery tray area like they show in the instructions, and tighten the reusable zip ties to hold it in. I'm not a fan of the way the battery is held in -- I'm used to doors that slide or snap open & closed. You also need eight AA batteries for the transmitter, which seems like a lot. Hopefully they'll last a long, long time.

Whew, finally it's time for some driving! I'm not used to doing that much preparation work, but I guess that's another thing that separates the two levels of RCs. It's important to always turn on the controller of a hobby-level RC vehicle first, then the vehicle, and when you want to turn it off, turn off the vehicle, then the controller, then unplug the battery. I like to think of it this way: The transmitter controls the car. If you turn on the car and there's nothing to control it, it might just control itself (literally, stray radio waves could make it go crazy).

When I first hit the street, the Spirit was actually backing up very slowly without me even touching the throttle trigger. Thankfully there's a throttle trim right on the controller, and it was really easy to just turn the knob to calibrate it. When I started going forward, it pulled to the right a little bit, and again a trim on the controller let me fix everything up. I really like being able to do the steering trim from the transmitter instead of having to use a screwdriver or a coin to experiment with a trim on the truck itself, like most RCs make you do.

Ok, the Spirit is fast. Really fast. I clocked it at almost 23mph, and that makes it competitive with the very fastest toy-class RCs, right out of the box. Better still, it's controllable and responds well and instantly with full digital proportional steering. The big slick tires give it really great traction on the street. Over small bumps in the road it hardly bounces at all, and basically I didn't get any bad surprises whatsoever. Wow.

Oooh I have done research on this car, much research, and I have dug up some verrrrry interesting information, yes! Do you think you are ready to hear this? Traxxas released the Spirit in 1995, but its chassis was designed all the way back in 1986! Surprising, yes, I know! The company, Traxxas, itself was founded in 1986 to help bridge the gap between toy-class and hobby-class RCs. Back then, hobby-level cars came as "kits," boxes of parts that you had to put together yourself, requiring great skill and hours of patient work. Once you put together a kit, you had to buy your own motor, radio, speed controller, everything -- sometimes the body and tires weren't even included! What a pain!!! Traxxas wanted to combine the charge-and-go simplicity of toy RCs with the higher performance and upgrade potential of hobby-level vehicles. So, they worked very hard in secret and in 1987 released two vehicles, a street racing car called the Fiero and an off-road buggy called "The Cat." Both of them came pre-assembled, and all you had to do was charge and install a battery and go! At that time, they coined the term "Ready To Run," which is now used very commonly in shortened form, "RTR," by all RC manufacturers.

Well, "The Cat" was eventually discontinued and replaced by better vehicles, but Traxxas designers later thought to put street tires on it and sell it as an on-road vehicle with a truck body. Yes!! That's right! The Spirit is actually "The Cat" from 1987, reincarnated!! But wait! It gets more interesting! The design of this chassis was actually a copy of another buggy that was being sold at the time, called the "Rhino" (and later re-released as the Thunder Bolt and Lobo II), made by toy RC manufacturer Nikko! Yes, that Nikko! The "hobby-level" Traxxas Spirit we have tested here, in 2006, is a copy-cat of a toy-class Nikko from twenty years ago! HA!

That's incredible! Many thanks to the Professor for digging all of that up. Wow. Okay, so here we have an RC from a hobby-level manufacturer, based on a 20-year-old Nikko design, being sold at a price that is competitive with Nikko's very best RCs of today, with performance that gives them a run for their money! The wonder doesn't even stop there. I was looking through the instructions again, and it seems like that battery mounting setup I don't like has a really good excuse for its existence. With a Phillips head screwdriver, you can reconfigure the battery tray to accept a 7-cell, 8.4V battery. With that extra power onboard, Traxxas claims the Spirit can go up to 27mph! Also, it's possible to change out the factory-supplied motor for an even faster one made by another company, raising the speed potential to well over 35mph. Traxxas even makes spiked tires that you can get to be able to drive off-road.

This is the cheapest, lowest-quality vehicle Traxxas sells, and it's arguably the lowest-quality so-called "hobby-level" RC car or truck you can buy. I still don't like the look of the body, but comparing it to similarly-priced (and even more expensive) vehicles in the "toy-class" arena, it's hard to beat in stock form. If you dare to go ahead and upgrade it, it then moves into another league altogether.