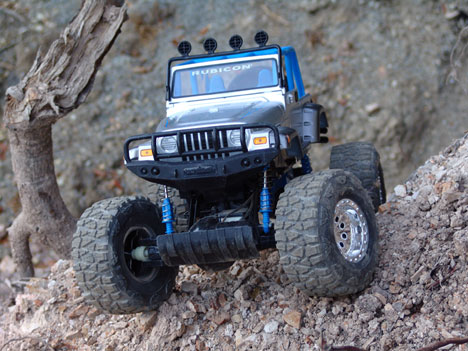 At 17" long at just under a foot tall, this Jeep just feels like a perfect size. There are a lot of realistic details on both the outside of the body and in the driver compartment. The front windshield and lightbar can be folded down, too. The suspension is the softest I think I've ever felt on an RC, and you can really move the wheels up & down independently, so I know it'll be able to tackle some tough terrain, as long as it has enough power. There's a lot of ground clearance, and the tires are big and have a nice tread, though they're a little harder than I expected. The wheels are sweet – clean, and they look right for the vehicle.

Typical for New Bright, all you need to do to get running is install the truck's antenna tube and screw in the transmitter antenna, charge the included battery with the included charger, and go.

Because this thing is a rock crawler, so I didn't even bother driving it on the street. Instead, I went out and found some piles of dirt & rocks to see just how tough it would really be! When you give it throttle, it jumps forward with the torque of dual motors (one in each axle for true full-time four wheel drive), but doesn't go very fast. As soon I hit my first real bump (a rock almost half the size of the tire), I could see that the suspension was really going to do its job as it climbed right over it. As I kept driving it over some really rough stuff, it just wouldn't stop. Even when I tried to get it stuck, I could still back out of it. I'm still surprised by how slow it goes, though.

Once I got to tackling some of the dirt piles, I was impressed by how steep it could drive. New Bright says 30 degrees is the limit, but it looked like it could do closer to 45 degrees to me. The problem was steering. Unless I went straight at the mound right from the start, I couldn't get straight to the top. Trying to steer while on an incline just made the front wheels loose traction and skid.

When I tried to hit some rougher stuff, I quickly started to realize the limits of what the Jeep could do. Though the tires are big and the body is lifted up high, there's limited clearance under the axles and they get stuck on things. The tires really don't grip well, either, and they would often just spin when I got in a really rough spot. One more problem was that 4WD didn't always come through for me – sometimes one axle would get stuck because it didn't have enough power, even while the other two wheels were kept spinning.

With more practice and experience, I started being careful to choose where to try to drive, and it became more of a fun challenge to make it from one point to another, like with real full-sized crawling and trail driving, where there's actually a person outside helping the driver line up each wheel with different obstacles to be able to get through the course without getting stuck. No longer was I getting frustrated with what the vehicle couldn't do, I was enjoying figuring out how to maneuver it through obstacles that it could overcome and avoiding the rest. Pretty cool. Do be warned that if you flip over, the side mirrors will break off. Oops.

Just a quick comment about speed, yes? More speed, more better, no? No! This is a c-r-a-w-l-e-r, it is supposed to c-r-a-w-l! If the vehicle was fast, it would be impossible to finely control, and it would overshoot and get stuck even more frequently! A true crawler must go slow to do what it is meant to do – there is no other way! No more complaining!

Oh……kay then. Crawler. Slow. Good. Gotcha. So, summing things up here is kind of tough. The Jeep is slow (which is good, right Prof?), doesn't turn well on an incline, gets less traction than I'd expect, and gets hung up when you try to go over a rock that's between the wheels. However, I still had a lot of fun with it. It really makes me want to try the Nylint crawlers for comparison, even though it won't be entirely fair because one of the Nylints is much bigger at 1/6th scale, and the other is much smaller at 1/18th scale.

I think if you're a serious fan of real rock crawling, you'll be very disappointed by this New Bright Jeep. However, if you are looking for an inexpensive RC that can go places most others can't (albeit slowly!), without getting a super-expensive hobby-level crawler, this might just do the trick.