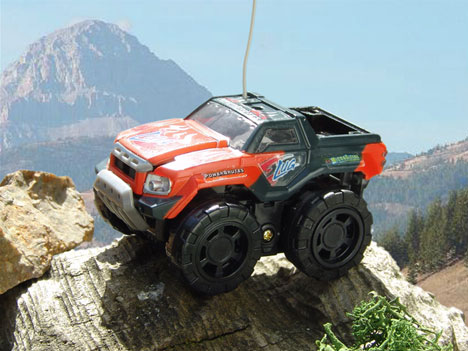 Even better than being able to put parts together myself was that it was easy to do! The tires snap right on to the axles, and you just have to be sure to put the soft rubber ones on the back and the hard plastic ones on the front. After the antenna gets fed through a hole in the roof, the main body gets hooked onto the back of the chassis and snapped over the front. The front was a little frustrating, though, because the bumper and hood are separate small pieces and you have to match them together just right. The optional front scoop or claw piece is just one big assembly and looks like it would be easier to put on.

There is a sheet of stickers that go all over the body according to a diagram in the instructions. Some of the stickers are really small, though, and I had to first stick them to a toothpick to help get them in the right places on the truck. Well guess what? If I could do it all over, I wouldn't. I think the truck looks more "clean" and realistic with only a couple of the stickers, or maybe even none at all.

As for batteries to power the 'Brute, it only needs two AA's, and you need a small phillips head screwdriver to put them in. There's a door on the right side of the transmitter that opens to reveal a charging port. You actually attach the whole truck to this to charge its tiny internal battery. It only takes 45 seconds!

The PowerBrute actually moves pretty slow, but boy does it have some torque! It can climb almost a 45 degree angle, and for such a tiny vehicle, it can actually handle some decent-sized bumps thanks to its working front suspension. It's not quite as tough as it looks, though, because even with the big tires, the ground clearance is low and you can't drive it over carpet or too much dirt or rocks.

I'm really happy with how well it can turn. The front wheels don't turn left and right. Instead, it just powers one rear tire at a time to turn. This lets it turn in a very small circle. It turns in reverse, too, so you can really navigate a tricky course if you want.

I was really interested in the front attachment, which on the orange truck I got, is a scoop. To put it on, I just had to remove the bumper and hood, and push the attachment straight on. Sometimes when you do this it might not engage into the front motor that makes it move, so you just have to take it off, push the Action button on the transmitter for a second, and try again. It's cool how it works when it's all hooked up. If you hold down the action button, the scoop moves up, stops for a moment, and then goes back down -- it's a cycle, which is why there's only one button needed. I'd guess that the blue version with a claw up front works the same way. It's strong, too -- I could lift anything I could fit on the scoop, even a big, solid rock! My only complaint is that it's kinda hard to get the scoop under things. I had to either help it out with my finger, or better yet, use the truck to push the object up against something else like a bulldozer, and then activate the lift.

I was really impressed by how long the PowerBrute could drive on one charge -- 4 to 5 minutes! Sure beats bigger trucks that have to be charged for four hours just to drive for 15 minutes. Hmm, I wonder if the Professor has anything to say about this pleasant surprise.

Ahh yessss. I recognize this transmitter from the Bit Char-G cars I first discovered on a trip to Japan a few years ago. Deep inside the chassis of the truck, you'll find a tiny little battery that is more powerful than you may imagine! I'll let you in on a little secret, so long as you promise not to speak of it to anyone outside my lab. Promise? Alright. When you charge the truck, it takes precisely forty-five seconds, and then it stops. Take the truck off and immediately put it back on for a second charge. It won't do any damage, and that's a promise from me! The only thing that happens is that you can now drive for twice as long before the battery runs out! That's right, over eight minutes of continuous driving! You can try it three times, but ehhh, I haven't found this to help consistently. Hmph, well, like I said, you can try it, but don't blame me if something goes wrong, and never charge it more than thrice, or the battery may explode! Yes, I said exploooode!!!

Well, the last thing I want to do is blow up this great little truck, so I'll just play it safe with one to two charges. Whew, this was a lot of writing! I really liked this truck, so much so that I'm going to try to get a friend to buy one so that we can race. The truck isn't too fast, but it's really maneuverable and really fun. As long as you keep it off of really rough surfaces, you can really do a lot with it!