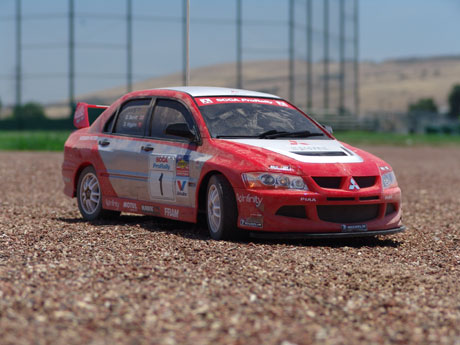 Wow. The car looks great. I looked up pictures of the real rally car it's based on, and Fast Lane did a really great job with the details and especially the stickers! It even has real lights that will only come on when you're driving. I also like the soft, real rubber tires here. The car seems really, really heavy though, probably mostly because of the very thick body.

Preparation is simple – slip the antenna tube over the antenna wire and down into its mount, and charge up the battery. There's a steering trim knob on the bottom of the car that seems to make really big corrections, so you want to get that set so that the front tires look like they're facing pretty straight. If it ends up being not quite perfect, there's a fine trim on the controller that you can use once you start driving.

This was the verrrrry first car we tested that comes with a 7.2V battery. Others before this have used either 6V or 9.6V. Now, "V" stands for electrical "volt." Normally, more volts means more speed. So, it only makes sense that the speed of this car should be somewhere between that of the 6V cars and the 9.6V cars, then, right? Ha! I think not! It should be faster, yes!

So you see, when a car requires a 7.2V battery, it usually means it has a strong motor, and it's going to be fast! Bwahaha! Now to show you! Hee-heeeee! Er, ehm, wait, where did that battery go…

Alrighty then, one 7.2V battery, locked & loaded. The first thing I did was set the trims, both of them. One is for the steering, and the other is for throttle. My car wanted to creep backwards when I first turned it on, but the trim took care of that. Off it goes across the parking lot, and hey, it's pretty fast! With the combination of the good speed and the really sticky tires, the first time I took a sharp turn, the car rolled over! Once the tires picked up a small amount of dust from the street, though, it never rolled again.

The fully digital proportional control lets you slow down just a little bit in turns or make small course corrections with ease. Once I got the hang of it, I could get it to do donuts, 180-degree fishtail turns, and even some short drifts. The rear of the car seems to bounce around a lot, though, so I think the rear springs are stiffer than they should be.

Now, real rally cars drive on all types of terrain, including street, dirt, gravel, and even snow. The box even shows a simulated picture of the car driving down a dirt trail. Looked like fun, so I headed out to an abandoned baseball diamond to see how well it would do. Man, was it hard to drive out there. The tires have some tread, but they're mainly designed for running on the street, so it was really hard to get traction. I think I figured out the best way to handle it, though. You have to give it throttle very slowly when you're starting, so that the tires don't just peel out. Once it's up to a moderate speed, you have to turn slowly if you want to stay at speed. If you need to make a tight turn, let off the throttle most of the way as you enter the turn and let it coast, otherwise it'll spin out.

This car is cool! It really looks great from any angle, whether driving or standing still, and it handles well, too. It's designed as a street car (real rally cars actually have to be completely re-tuned before they go off-road), so the fact that it could drive in dirt at all was a treat. The only thing I really didn't like was that the back end likes to bounces around a bit. Otherwise, I'm really happy to have had a chance to drive this car, and would love to do it again!