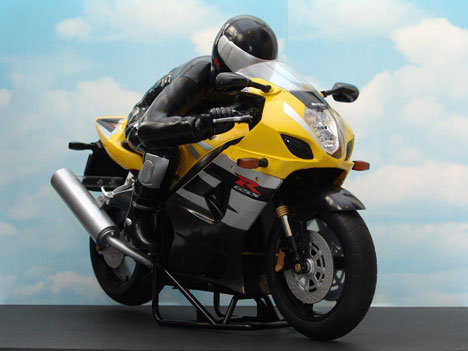 This bike is huge. I truly looks amazing. It has working suspension front and rear, real rubber tires, and for-show-only details like disc brakes & mirrors. The headlight really works, though! The multi-band radio system lets you run up to 4 of these bikes at the same time by just changing a switch on the transmitter and a matching switch on the bike -- there's no need to carefully shop for the right color or frequency to make sure you don't get a conflict.

Taking the bike out of the box is the most of the challenge here -- there are a lot of strips of tape holding down a lot of really tough twist-ties to keep this beast held down in transit. Once it's out, you just charge & install the main battery (a standard 7.2V pack), install the optional stabilizer bar that keeps the bike from falling all the way over. If you have trouble screwing in the transmitter antenna, try turning it counter-clockwise (I know, doesn't make sense, but worked for me – the threads were backwards).

(Strangely, the Professor was nowhere to be found.)

The first thing that stands out when you turn the bike on is the sound. It's the coolest sound setup I've ever seen (heard) on any RC. Flip the bike on and it makes the sound of an actual GSXR-1000 ("gixxer" to real sportbike fans) being started up. Push a button on the controller and it revs a couple of times. I have to admit, I almost got addicted to hitting the rev button. When you start to drive, it makes acceleration and gear shifting sounds, and when you stop, it sounds like it's slowing down quickly and then screeching to a halt. It's just a shame that the sound isn't very loud (though the gears in the bike are), so you can't hear them once you get any real distance away from the bike.

Alright, enough with the bells & whistles, time for some actual driving. As you'll see in the video, the driving test didn't start out too well. When you go into a turn, the bike first leans over, but then straightens up again for a second before going in for another brief lean. It keeps doing this back & forth bobbing motion even when you keep the controller turned all the way in one direction, and because of this, it doesn't turn very sharply at all. In fact, to really drive the bike around freely, I'd say you need a good 100 ft. x 100 ft. area. Don't even try turning with Turbo engaged… then you'll need more like 200' of space as it barely leans at all.

Speaking of Turbo, it's activated by a another button on the controller and does make a really big difference in speed -- I saw a surge from a normal 11.3mph up to 15.5mph with turbo in my tests. That's pretty good speed for such a big, heavy bike powered by such a small battery. Because of that large size, though, it ends up looking a lot slower than it really is. Sometimes you just can't win. For a good time, though, try kicking it into Turbo and running after it.

This is a tough one to sum up. Like I said, the bike looks awesome and the "wow" factor is practically off the charts. As a big vehicle it needs a big area to drive in (really, really big), but once you give it enough space it goes pretty fast and is pretty stable. When you run it with the optional wheeled bar attached, it basically never falls over, so you don't have to chase it down unless you stop facing a solid obstacle (did I mention it doesn't have reverse?). But, you know, though it does lean into turns like a motorcycle is supposed to, it doesn't stay leaning over like it's supposed to. Since it always keeps standing back up like it's afraid that it will fall over, it acts like it has half a mind of its own, and a stubborn one at that, really putting a damper on the handling possibilities.

Because the bike takes so long to turn and the radius isn't smooth, it's probably going to be very difficult to race two or more of these bikes together unless you have an absolutely huge area to drive in, and even then, I don't think it'll be too exciting. That's a real shame, because the multi-band system with four frequencies is a great feature that I wish more RCs had.

Know what's really funny though? Even with what I now know about this bike, I'd still be tempted buy it. There's just something about that says, "GOTTA HAVE IT!" If you ever see one in person, you'll immediately know what I mean. Hide your wallet! Remember the review! Noooooo......