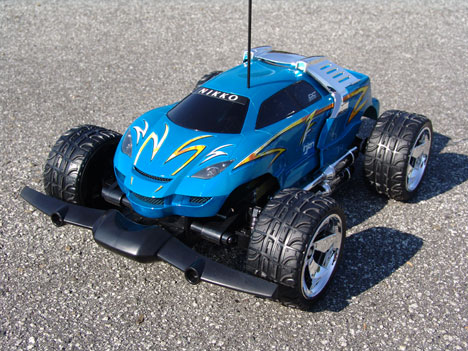 Ok, wow, this is something different! It definitely looks like it's from about 50 years in the future. The wheels are wide and way outside the body, and the tires are low-profile and have a tread pattern like I've never seen. There are a lot of chrome accents, but it's not overdone. There's independent suspension in the front, but unfortunately none in the back.

Just when I was getting curious about how it's supposed to do its transformation into a high-riding SUV, I accidentally got it to start transforming without any power! You can sort of squeeze the front bumper and rear axle and the whole body will rise up and transform in a scissors-like action. You really shouldn't do this (and I won't do it again) because you can strip the gears inside. It was a surprising preview of what's to come, though!

No batteries are included with the Morph-N-Ator, so you'll need to supply your own standard 9.6V rechargeable battery pack (with a standard two-pronged white "Tamiya" plug like Nikko always uses) for the car, and a regular 9V battery for the transmitter. Other than that, you just install the antenna tube, and you're ready to go.

We tested the Morph-N-Ator in a wide open parking lot to give it plenty of room to show what it's made of. The transformation process, activated by an extra button on the controller, is COOL. You really have to watch it from all different angles to appreciate everything that goes on. The front & rear wheels get closer together, the chassis bends in half (but kinda rotates too, because the bumper stays facing forward), the chrome exhaust pipes on the side get shorter, the bed/trunk area that has details that look like speakers gets tucked away inside, and the trim on the side slides up closer with the side windows. When it's done, you have this really tall hatchback mini-SUV, and it happens quickly and smoothly. Nice.

In its low-slung form, the Morph-N-Ator is very, very stable and drives well. When it's transformed into its high-riding form, it drives very, very differently. It becomes much more agile, turning sharply and quickly, and it can be made to do 180 whip-turns pretty easily by turning and quickly tapping reverse. Best of all, if it hits a bump just right, or if you go backwards a little before going forward, it does a wheelie! Now, when I say wheelie, I don't mean just lifting the front tires up off the ground a little bit, for a second or two. It goes all the way vertical, nose pointed sky-high, and can actually stay up like that for a little while! There's actually a wheelie bar on the back that helps it to drive along without scraping any part of the body, and also to keep it from flipping all the way back. For a really cool trick, transform from car form to SUV form while going in reverse, then go forward to start a wheelie. While it's riding on two wheels, transform back into car form! Awesome!

The one problem I did encounter was the battery door opening up and dragging on the ground. It seems like vibrations from bumps and coming down from wheelies made it just work its way unlatched, and I couldn't figure out how to make it stop without using a twist-tie or piece of electrical tape or something. Be warned.

Ohhhhh look at that. It goes up and down and uup and dooown. It's very cute, really, but what does it actually do? De Morph-N-Ator is supposed to be a low, sleek sports car in one form, and a tough off-road truck in the other. Okay, in sports car mode, it is good -- low and stable. Now, the things you need to go off-road are aggressive treaded tires, softer suspension and plenty of "ground clearance" (space between the ground and the lowest part of the chassis) so you don't get stuck on rocks or scrape the bottom when you land a jump. The tires, for the speed of this car, they are fine both on the street and on dirt. The suspension is so-so -- there is none in the back, so that could be better for driving off-road. What of ground clearance? Okay, yes, the body goes up & down, but does this really matter? No, it does not. When the Morph-N-Ator is in SUV configuration, the bumper is still very low, as is everything except for the very center of the chassis where the battery is held.

In reality, the Morph-N-Ator's transformation only makes it able to do wheelies and turn more sharply because its weight is higher and its wheelbase (distance from front to rear wheels) is shorter. It does not truly become an off-road truck, it only looks like one.

Hmm, now that I look at it again, the Professor is right. The ground clearance doesn't really change, and unfortunately I didn't get to test it off-road before passing it on to its next owner. I can see that it won't do well on really rough terrain, but it should be fine on smoother dirt with some jumps and little hills and bumps, as long as there aren't a lot of rocks that can get stuck under it. On-road, though, the Morph-N-Ator was really great fun, and the transforming action has to be seen to be believed -- it's addicting! Plus, in a race, it would be very useful to transform to high-riding form when approaching tight turns, to cut them as close as possible, then go back to low mode for the straightaways. The battery door issue was an annoyance, but all in all, this is a fun RC.