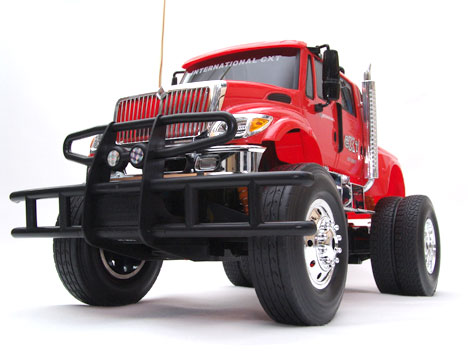 New Bright makes two versions of this truck – one is a huge "1/6th" scale, and this is the smaller version. It's still nice in size though, almost 20" bumper to bumper. Some people may call it 1/10th scale because of its physical size, but it's actually scaled down a bit more because the real thing is really huge. Surprisingly, it's very light in weight, which should be good for speed. It has semi-pneumatic rubber tires and working rear suspension, but the front suspension is fake (well, the springs are real, but they don't move). The truck has nice detail and looks good. The chrome wheels really shine.

The included battery is a non-standard style with electrical contacts on the sides, but there is a standard "Tamiya" plug in the truck so that you can run normal 9.6V's made for Tycos, Nikkos, etc.

Oh, and it's worth noting that the truck was really easy to get out of the package – no thick zip or twist ties to cut or spend 20 minutes unwinding.

No surprises here. Install the antenna tube (tying a small knot in the wire right at the top to keep the tube from sliding off), and screw the transmitter antenna in. Charge up the battery (8hrs for the initial charge, ugh), and you're ready to go.


In the Professor's Lab

(The Professor was busy cleaning up his lab after an experiment went "not exactly as expected" and was not able to participate in this review.)

Well, in addition to being light, this truck is pretty strong too – it can actually climb a 30 degree incline. Even though it only has suspension in the rear, the tall rubber tires let it go over some pretty big bumps without getting stuck, and it can handle really coarse gravel with ease. Unfortunately steering is very limited (the wheels just don't turn very far), so to turn around in a small space you have to go back & forth a bunch of times.

The transmitter has the two normal controls for throttle and steering, plus a third one for speed. It works like a gear shift, though it's strictly electronic. You can switch it either before you go, or while you're running. Top speed at the slower setting is 5.8mph, and 6.8mph at high speed. Low speed is better for realism and also increases the runtime per battery charge, but honestly, there's not that much of a noticeable difference, so you might as well go as fast as you can all the time, right?

Cool truck. If you like how it looks, I think you're gonna like how it drives. I only wish it had a tighter turning radius!